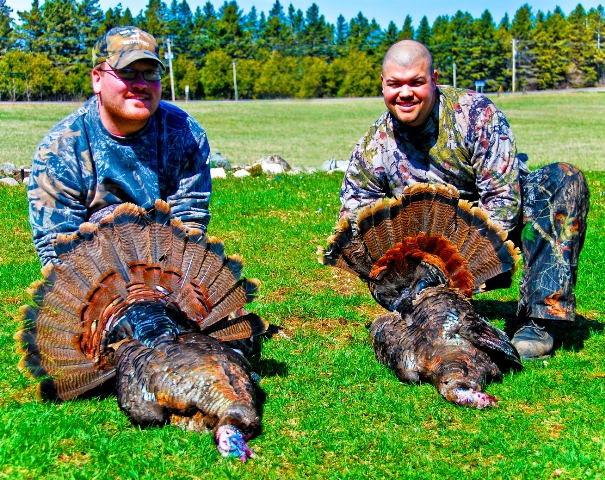 (L-R Lukas West, Chris Chatterson.  Chris’s jake was marginally bigger.  Photo by Lucas Hunter.)
This was great for both of them and it put me in mind of my first turkey as well, so we chatted and dressed the birds out, and had grand old time telling lies and stories to each other.  With two turkeys down, the afternoon was going to have to be pretty productive to match the morning.  Overall, it was a bit of a bust.  We put some miles on running and gunning the from Spry to …frankly it was mostly “running” as the turkeys weren’t co-operating.
We saw some wildlife, including a good-sized bear and some hens, but we were coming up short in terms of the gobblers.  We stopped in to rattle off a few calls at a place where a mutual friend has some property, and found a hilariously ironic sign that I am yet to receive a photo of.  This gave us a good laugh.
Eventually, Dane and I got a visual on two good-sized birds at the distant end of a field we had permission to hunt, and attempted to sneak within calling range.  After being set up for a while with no response we got up and moved closer to their last sighted whereabouts, hoping to get a visual on where the birds had moved to.  As it turns out, they had just disappeared…gobblers sometimes do that.
We wrapped the day up, and I had to get back to on Saturday evening, so we had a quick dinner of sausage on a bun, threw back a couple colas, cleaned the house up and hit the road.  It had been a frustrating weekend that had started with promise, but that had ended with Lucas and I getting skunked…and not even hearing a gobbler in the process.
But as we drove south down Highway #6 and looked to the east as we passed through Mar we saw a strutting gobbler and five or six hens, which made me think on the positive side.  After all, it was just the first weekend of what will be a few this turkey season, and I’m sure it won’t be long before I get on a gobbler.  When I do, I’m sure I won’t have any problem remembering the details to share with all you readers.
And hopefully those memories will be created tomorrow morning in the Halton County Forests.  We’ll see.