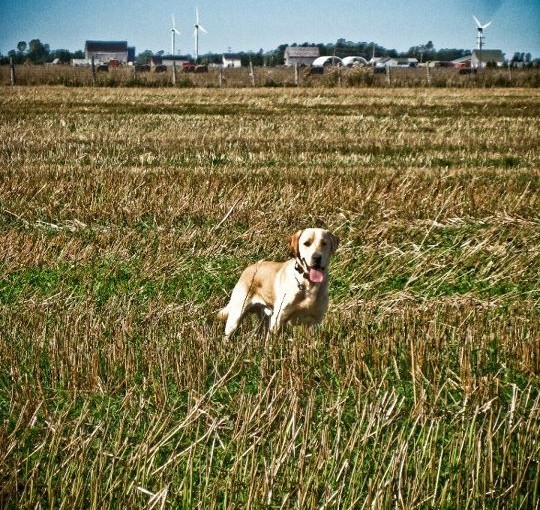 I arrived back from grocery pick up after the morning hunt just in time to find everyone back at the farm and ready to go; they told me to hurry up and get my gear together for the afternoon trip.

While I double-checked to make sure that I had not forgotten anything, Tack laid down the plan.  There were three cut grain fields bordering the highway just outside of town and while no geese had been feeding in them yet, they were primed for a hunt.  We had a skeleton crew for the afternoon, with just six of us heading out.  I’ve never had a lot of success in afternoon hunts during the early season, but as the proverb goes “make hay while the sun shines”.  I was up there to hunt, and hunt I would.  It was very hot out with little in the way of a breeze though, so rather than load up with camo, I opted instead for the oh-so-fashionable t-shirt and shorts with rubber boots look.  We packed up the trucks and Lucas, , Dane, Jason, myself, Tack and Tack’s dog Levi headed for the fields.  Rory was going to show, but later decided not to.
This was Levi’s first hunt, so Tack set his blind up towards the back and facing near perpendicular to our line of blinds, opting only to shoot at birds that were outside the pocket we had created with our decoys.  Levi, wearing a coat of the golden yellow that blended seamlessly with the grain stubble, crouched down in the grass next to Tack’s blind even hopping in with Tack once or twice (Levi’s not too big just yet, and Tack is rail-thin so it wasn’t as cramped as you’d think).  This pup had been in training for just under a year, but we all had high hopes for him.  He’d turn out to be the highlight of the day.
As we put the finishing touches on our setup and settled into our blinds, I became aware of two potential challenges for this hunt.  First, even though we had gone a couple of hundred yards out into the middle of the north grain field, the east edge of the field was still close enough to the highway that the noise of cars driving on it made hearing geese at a distance difficult.  The second was a challenge and a mixed blessing.  A slight breeze had picked up and was blowing out of the east, which allowed us to set up facing away from the highway and thus negating any risk that we’d have to shoot our shotguns towards the roadway (even at a couple of hundred yards it is never a good idea to be popping off towards traffic…I’ve still seen some hunters do it though).  As some of you have likely inferred though, facing west on an afternoon hunt on a sunny day poses its own issues.  We brushed the blinds up extra heavily and settled in with the mid-afternoon sun beating down directly on our faces.  It was just about 3pm.  For over two hours we lounged in the sun, making jokes, telling stories, and generally having fun at one another’s expense.  No geese flew.﻿