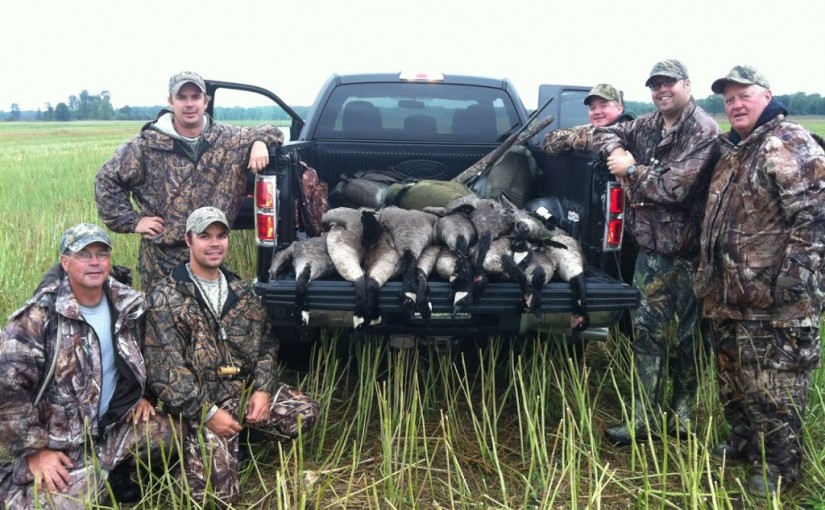 I’ve long held a theory that when there aren’t many of a given species of animal around, those animals in reality become easier to hunt.  Harder to find, but once found, relatively simpler to hunt.
When early goose opened up, I got a text from a friend of mine that a crew of guys had been really putting the hurt on the geese in our preferred hunting area.  Working them hard, shooting lots of them, and generally giving the geese a crash course in how to avoid decoys, calling, and putting a stack of pressure on them.  For a long time, our crew was the group putting the heavy pounding on the geese, but with abundance comes competition.  I’ve never minded a little bit of competition.
We stood out in the laneway until nearly midnight telling stories, laughing, and planning the day to come.  It was warm and windy, but the morning forecast told of rain coming.  Five o’clock came around awful quick and when I heard my alarm going off, the background noise outside was of pounding rain and rumbling thunder.  A flash of lightning or two made me think of rolling over and snoozing away.  Unfortunately (or fortunately) the gang was meeting in my kitchen, so I really had no choice but to suit up.
We stood in the kitchen in our gear watching rain teem down and we decided that we were going to brave the elements.  At about the time we pulled into the field, the rain had basically diminished into a thin mist, but it was still grey and foggy as we put out the decoys, and as we hunkered down in the grass along a fence that separated a pasture field from cut canola we shot each other some worried glances.  This was option “D” for us, and none of us were sure that the birds would co-operate.  Those worries were put to rest in short order.
Within ten minutes of getting situated, a small group started winging directly our way.  We hardly had to call them, and a few moans and soft clucks had the geese locked up and dropping in.  We shot adequately, but did leave a long retrieve or two for ourselves.  Every ten minutes or so for another ninety minutes they came in like that, and while our shooting (or at least mine) definitely had some early season rust on it, we put a dozen in the truck bed before 9am.  The last group of the morning hunt made me especially happy.  We were asleep at the switch and by the time we saw them they were floating down into the middle of a cut field on the other side of the road.  Rory, Tack, and I got aggressive on the calling and, to my surprise the birds picked up and started climbing.  They made a narrow clearance over the hydro lines next to the road and then started floating down again, this time about forty yards out from our ‘sweet spot’.  With good work on the low end of the calls we drifted the group into range, taking down the last geese of our morning.  A few photos and a celebratory meat-lovers omelet made me happy to be hunting again. Feeling lucky, or foolhardy, those of us with layout blinds made a run on the same field for the afternoon.  We set up more to the middle and heavily grassed in the blinds.  Looking back at the blinds from our anticipated landing zone, I had to admit that they looked pretty fine.
Four hours and a couple of naps later, we had seen exactly one flock, and it had no interest of even looking our way, even though we flagged and called sweetly to them.  It was one of the only times that I’ve ever hunted that the geese did not come off the water in the evening to go to the fields.  One group to the northwest got one goose.  Hardly any were flying at all.
The only plausible solution to such a fruitless afternoon hunt was to make the spiciest possible meal from some of the geese we had shot in the morning.  Using fresh jalapenos, herb and garlic cream cheese, and browned cubed goose breast meat I presented my fellow hunters with a plate of cripplingly spicy deliciousness.  They complained and moaned, but it all got eaten.  Again it was nearly midnight when the lights went out and the stories stopped.  Some of our intrepid cohort went into town for a wedding dance.  None of that motley crew made it out for a shoot in the morning.
For those of us not inebriated, the next morning was significantly sunnier, but also crisper with a wind that blew hard and often from the northwest.  We set up in gloaming light, but a blazing fireball rose above the horizon soon enough.
Now, I hesitate to read the mind of geese, but I can safely say we saw thousands of them that morning and almost all of them had not the slightest inkling of landing in our setup, which this time had us secreted away in a copse of trees found in the middle of a freshly cut grain field.  When we stood in the shadow and overhanging limbs of the sparse trees we were as well hidden as one could ask.  Unfortunately, as we stood about in the field edge talking on the subject of women (I think) three geese…the only three geese we saw that morning below an altitude of one hundred yards…checked our spread briefly and then departed upward.  No one even managed a shot.  The other 997 geese we saw that morning were all flying high, fast, and due south.  No flagging, calling, decoys, or the prayers of us desperate heathen hunters seemed to interest them one iota.  It was my hope that all the smart local birds were in that army of geese marching down the peninsula, because the way I’d been hearing it the flats we hunt had been shot hard for four consecutive days and it was getting such that even the most persistent hunters were tasting diminished success or outright failure.  Geese hung back and circled at distances that would make the most shameless sky-buster blush.  They were just being downright ornery and tough as hell to work.  I had a walloping huge plate of bacon and eggs to drown my sorrows at being so handily defeated that morning by a bird with a chestnut-sized brain.
But despite the hard-slogging, we were hunting again and as we laughed and were cruel to one another’s failings and faults, it didn’t really matter how much we shot or didn’t shoot.  There was a time when we valued our experiences in body count, but the bloom has been off that particular rose for some time now, and although I won’t speak for a goose, I think I can speak for my hunting chums when I say that we get a thrill from watching the birds work, from calling them in and seeing success in our set up, and from hamming it up with each other during the downtime.  Since I know Rory reads this, I’ll pump his tires by telling the Internet that he’s a crack shot with a crab apple and that he’s fortunate I have a sense of humour.  In two weeks we do it all again for geese and ducks, and this time with the added bonus of a new mourning dove season in our neck of the woods.  I can’t say with certainty that we’ll have more success or less, but we’ll have a time trying and it may even breed a story or two for this medium.

Still, I hope to hell that the birds play nice for an afternoon or two, because I can only write about pretty mornings, food, and defeat so often.