The Thursday afternoon sun broke through on my left as I passed out of Shelburne on my way to the Bruce Peninsula, and I slipped my sunglasses on and turned the radio up.

Somewhere, I thought, there was a turkey on the Bruce that did not know I was coming for it.  This was not because of some sort of tactical skill on my part, but because turkeys probably don’t concern themselves with the specific dangers coming their way.  I’ve always observed them to be generally more concerned with countless non-specific dangers, and this observed paranoia is what no doubt makes them wily, hardy, supremely adapted, and frustratingly unpredictable.

And it is because of those traits that I’m hopelessly addicted to hunting them.

Arriving in the laneway of the family farm to a blazing orange sunset, I found it hard to believe that the weather models were calling for a soaked and dangerously windy Friday to come.  It was so bright and hot, that I peeled off my sweater and slipped into a simple t-shirt while I waited for a couple of my friends to join me around the farmhouse table for scouting reports, some laughs, a couple of beers, and to lay out the plan for Friday’s hunts.

The scouting reports were easy; a half dozen hens and a couple of longbeards were living right on the family farm property, which they seem to do cyclically.  In fact, the whole area around the farm had been lousy with turkeys during the early season.  Strutting and gobbling was down, due in our minds to the delayed arrival or a true spring, but the birds were finally starting to develop a pecking order and the toms and hens were beginning to get right.  The planning for the next day’s hunts was also a mere formality; with a 100% chance of rain from 3:00 AM through to 2:00 PM, all of the turkey hunters that I call family and friends were going to sleep in or do one more day of work.  I was resolute that short of a hurricane hitting the area I was going to be foolhardy enough to be stationed under a tree at 5am the coming morning.

With the last rays dying in the west, I slipped on my boots and walked up to owl hoot at the treeline, in the hopes of pinpointing the trees that the birds were in.  It was dead calm, and the notes roared out of the call and echoed around the bush. Silence was my response, but I was still hopeful that the morning would bring some action.

Three hours later I lay awake in my bed, unable to sleep out of sheer excitement for the hunting to come.  The rain tapped down soothingly on the rooftop, but there was to be no retreat into sleep for me.  I got up, lit a small fire in the downstairs woodstove, and fidgeted with calls and equipment and social media for a couple of hours until it was time to gear up and hike to my chosen tree.  I was secretly grateful for the last-minute decision I made to pack my camo rain suit when I shut the door behind me and was buffeted by wind and a hard downpour.  My watch said it was 4:50 in the morning.

I made the short walk to my spot and was placing decoys just after 5:00 AM.  No leaves were on yet, and the rain had no barrier between the heavens and my person, and within minutes anything that was not covered by rain gear was cold, heavy, and absurdly wet.  I made a mental note to pack this up and head back to the warmth of a woodstove and a hot breakfast by 8:00 AM.

The black of night slowly dissolved into the hazy grey of a rain-soaked dawn, and just after 6:00 AM there was a slight let up in the misery.  I took the opportunity to float a few soft tree-yelps and clucks on my mouth call, and somewhere to the north of me, a hen turkey softly responded.  I anxiously cocked an ear waiting for the gobbled response of a tom turkey, but instead I heard the pick-up in wind and rain that was blowing my way.  The downpour returned with a vengeance and at times my hen decoy was almost lifted from her stake by wind.  Both decoys spun unnaturally in circles, and I scaled my personal deadline back by an hour.

7:00 AM could not come soon enough to my drenched, cynical, and now slightly-shivering body.

As the gale increased in force, I grew aware that a single limb directly over my head was dripping a steady, rhythmic beat on the brim of my hat.  I slowly reached up hoping to break the branch off, but it was agonizingly out of reach.  Knowing that if I stood up, I would very likely give up and head home, I bit the bullet and slid slightly to my left; the dripping now pounded on my right shoulder and occasionally down the back of my neck, which was an only slightly preferable situation.  At 6:30 AM I was granted another slight reprieve and the wind slowed enough for me to ring out a series of yelps and cutts into the woods.  Again, nothing answered and I added some urgency and raspiness into another series of calls. Silence and a slightly defeated frustration were my only response.

I checked my phone to see if anyone else had been as lunatic as I and gone out into the nonsense, and seeing no other hunters reporting, I noted the time as 6:45 AM and resigned myself to fifteen more minutes of misery.  Both my gloves were soaked to the point of uselessness, and my fingers were increasingly stiff and numb.  The morning hunt was no longer fun, and I was just being obstinately masochistic by that point.

What happened next played out in about 45 seconds.

With the wind still calm I was mulling my own pigheadedness when I heard a telltale sound that excites every turkey hunter.  It is a sound, not a word, but to transcribe it would run something like this:

A gobbler was spitting and drumming from a hidden point behind a woodpile that was ten yards behind me over my left shoulder, and I craned my neck slowly around to see his fire-engine-red head appearing from behind the woodpile.  He was half-strutting into my hen and jake decoy setup at double time, and he passed by me at a mere twelve steps.  He marched up to the now gently swaying fakes and promptly hopped onto the jake decoy with a thumping kick to the chest.  I shouldered my dripping wet 870, and he caught that movement, jumped off the decoy and began to quick walk to my right.  I covered his head with the bead of the gun and tightened my hand on the trigger.  The boom appeared to startle him and I was shocked to see him still trotting to my right.  The same moment I pumped the gun, he stopped and looked at the wobbling jake decoy.  I covered his head again and fired once more.  He cartwheeled backwards and began bicycling his legs in the air.  I pumped out the empty and the last live shell in the gun, put the weapon on safe and stood up. 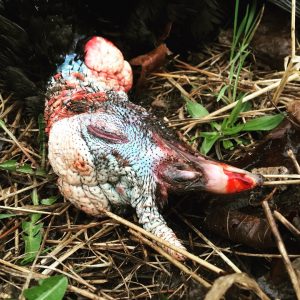 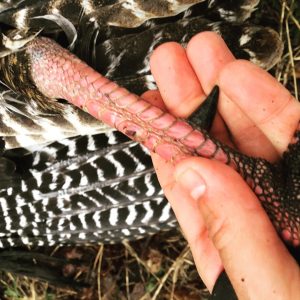 My legs, shoulders, and hands suddenly didn’t feel so pained and numb.

I walked up to the bird and nudged his head with my boot, he limply flopped and was then still. My first shot had been at a mere 12 steps, and I imagine the shot pattern through the super-full choke I shoot was baseball-sized as it whizzed past his head.  The second shot had been at a much more reasonable 22 steps, and the #5 pellets had done what I had bought them to do.  I carried him out of the rain and back to the tree where I tagged him and took a handful of quick photos.  I was perplexed that he was out at all on such a dirty day, but I was thankful that he had been and that he’d given me another reel of moments for my memories.  I was grateful for the opportunity, sopping and chilled though I was, and although he was bedraggled and muddy, he still had all the requisite beauty that I associate with the wild turkey.  Weighing in at 21 ¼ lbs, he sported a ten-inch beard and ebony black spurs fractionally shy of an inch.  Putting him over my shoulder, I thought about what his previous couple years of life had been like and about how I was going to cook him for family and friends.

Carrying him out, the rain picked back up and flew sideways from the east, stinging my face and whipping his drenched tail fan into the back of head.  His weight wore on my shoulder and wrists, and I was shivering when I hung him by his feet in the woodshed at the farm.

I went in and peeled off dripping clothes, then stoked the fire into a roaring inferno.  Within a half-hour the kitchen was sauna-hot and I sat in shorts and a t-shirt warming up my bones. I texted friends and family and they were all incredulous that I had lasted that long, and all the more shocked that a gobbler was actually out trolling the area in such wretched conditions.

I just grinned and relived those recent moments over and over again, thinking about how much I would be willing to suffer what are, in reality, quite minor personal discomforts in order to hunt these incredible birds. His story and mine were forever linked now, and I felt a twinge of sadness that our brief time was already a moments-old memory.