I’m obviously pretty happy with this.
Dane was certain that I had just shot his $100 decoy, and I was pretty sure that I had just become the new owner of a $100 decoy full of #6 sized holes.  But more importantly, for a second, I couldn’t whoop or shout with joy or hardly express anything.  I was just washed in a sense of relief and reflection; that old tom had made us work for him for sure, and I exhaled a relieved sigh and let things sink in for a second.  I stood up and made a beeline for Dane’s jake decoy to assess the damage; I can say for sure that if I wasn’t sold on Avian X turkey decoys before, I was then.  Either I had pulled off an act of precision shotgunning beyond compare (unlikely) or the peppering of the decoy at 30 steps with a dozen pellets or more hadn’t left a single hole (or even a noticeable paint defect) on it.  The word ‘durable’ immediately springs to mind.
I put my boot on the gobbler’s neck and grabbed his feet, avoiding the spurs that looked like straight daggers to me.  Both would come in at just under an inch and they certainly had a point on them.  He had a nice beard, but again the end was frayed and brittle betraying that perhaps a bit of it had frozen off in the hard winter that struck the Bruce Peninsula this year (check Google Images if you’re interested in seeing some eight foot snowdrifts).  I tagged the bird before we took some photos, and by that point relief had given way to that goofy joy that just makes a successful turkey hunter smile constantly.
We stopped off on the way back to the farm and weighed the gobbler.  He came in just a hair over 21lbs, making him the heaviest bird I have ever shot, and that combined with his flogging of the decoy along with the overall circumstances of the hunt made him a true trophy for me.  Later, it sunk in that I had just managed to take the two subspecies of Canadian wild turkeys in two separate provinces separated by over 3000km in the space of five days, and with no false modesty I can say that I felt pretty damn good about myself.  Even more meaningful was taking photos with my two sons and seeing their interest in the bird’s head, tail, and gorgeous plumage.
Moments like that are what my dad calls “Passing it On” and seeing my wonder, awe, and love of wild game reflected in the eyes of my sons in that moment was a feeling almost as addictive as the one I get from chasing a sun-dappled spring gobbler in the green fields and rejuvenated forests of a place full of my family’s heritage.
And I still had one more Ontario tag in my pocket. 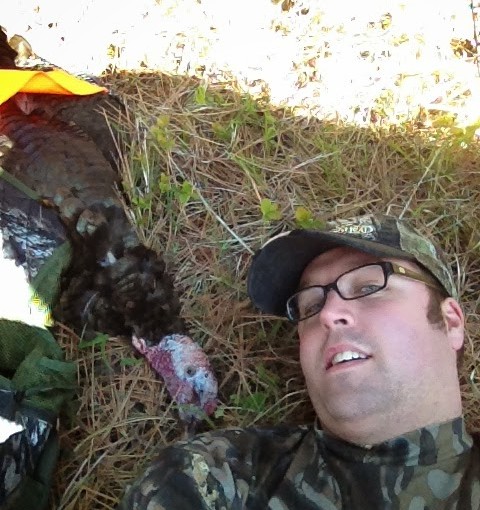 I put my bootheel on the turkey’s neck and grabbed his feet, whereupon the gobbler lamely flogged my right shin with a wing beat or two.  I was shaking like a leaf, and adrenalin hammered in my veins.  I vaguely recall hearing my heart beating in my ears.  If having a turkey outsmart you makes you instantly and hopelessly cynical, there’s likewise no better route to pure joy than sealing the deal on that same bird.  Even though it had all happened so fast, and just minutes before, we relived the hunt (as hunters are apt to do) and we took dozens of photos.  I notched my tag, and we made for the truck.  I could hardly feel the weight of the bird I was in such high spirits. He was not a typical bird, and at first I thought he was a jake.  He barely had spurs at all (only 1/8 of an inch on each leg) and his beard was just a 3-inch stub, but he had a full, even tail fan with the tawny, pale signature feathers of a Merriam’s gobbler.  On closer inspection, the beard was rotted and frayed at the end, and my suspicion was that it had frozen or otherwise been broken off (a sentiment echoed by all my turkey hunting brethren when they saw it).  But I wasn’t on that trip to shoot a monster longbeard, or a sharp-spurred limbhanger.  I was there to take on a Merriam’s gobbler on his own turf, and with the help of my friend, I had succeeded.  I pride myself on being eloquent and articulate, but in those moments (and to be fair even still, a whole month later) I didn’t have adequate words to describe the feelings.  I was exhausted, elated, and on the brink of crying tears of joy.  This was a bird I’d wanted to hunt for a long time, and the only other subspecies of wild turkey other than Eastern that lives in the cavernous expanse of wilderness that makes up Canada.  I could say now that I’d achieved a turkey hunting goal, and that Chris and I had done it with our hodgepodge mix of local savvy, woodsmanship, and turkey hunting experience respectively.

We’d persistently hunted some pretty tough country, and we’d made good decisions (especially that morning) that ultimately brought the game to hand.  I was proud of myself, but I was really happy for Chris.  He had never hunted turkeys before, and I hoped that I had made a convert of him.  The bird, for his part, certainly provided a compelling case for the excitement and rollercoaster of emotions that a successful turkey hunt can bring.  We honored his sacrifice by eating him a mere seven hours later.

In the back of my mind, I knew I’d have to get back to work eventually, and I knew that my wife and kids would be happy to see me.  I also knew that I still had at least three more weeks of turkey hunting to do in Ontario.  But as we sat in the sun in Chris’s front yard, cold cider in hand, and our bellies full of wild rice, wild turkey, and carrots I could not help but feel completely at peace with the world.  The stresses of work were several provinces away, the afterglow of a successful hunt surrounded us, and we were in arguably the most beautiful countryside in the nation.  We talked about Chris making the next year’s trip to Ontario for an Eastern turkey hunt, and I can say that it sounded like a pretty damn good idea.

There was nothing that could break the good vibes that afternoon. 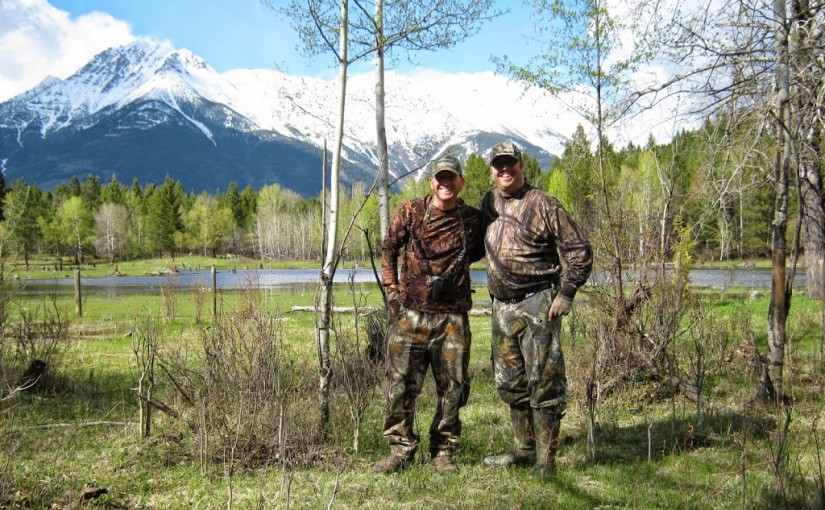 On our walk to what would be the final stand of our day, we crossed a muddy flat, and came across the fairly fresh, large and unmistakable track of a large bear.  I photographed the print, and put my size 12 left boot alongside it for scale.  The track was essentially the length of my foot, and we would later identify the track in a field guide as that of a grizzly bear.  To say I was a little more comforted by the can of bear mace at my right side would have been an understatement.  The next kilometer or so of hiking was filled with Chris recounting the stories of the five or six people he knows who had themselves been mauled or had had loved ones involved in bear maulings.

Chris knows how to put a man’s guard at ease.